Imagine a world where rich traditional heritage and modern western civilization functioned as perfect pairs? It is from having a vision like this that the idea of My Beautiful Home Was born.

So where did it all begin?

During countless hikes in the breath-taking Matobo hill in Bulawayo, Zimbabwe, Veronique Attala envisioned My Beautiful Home, a project that aimed to research, revitalize, and stimulate the communities within the district and rekindle their love for their traditions and cultural heritage. Veronique recalls a moment on one of her walks, where there was a strong feeling of being part of the same human soul, connected by the universal language of art.

Although her desire to fulfil her vision was strong, it was only until later when she was joined by Pathis Nyathi and John Knight that she truly realized her vision and initiated the first-ever My Beautiful Home competition in August 2014. A vision that was inspired by her admiration and gratitude, which triggered the idea for the competition that would encourage this wonderful but fading tradition. The competition is run each year in the Matobos region and aims to encourage and reward old age traditions of decorating huts traditionally, using natural materials such as ash, coal, and soil, which highlights and preserves the art and culture of the area. The women of Matobo paint the exterior of their huts after the harvesting period as they have more time on their hands. It is an annual ritual that renews these women’s cultural traditions as each season they beautify their homesteads with continually changing imagery.

"A people without the knowledge of their past history, origin and culture are like a tree without roots," - Marcus Garvey.

This upliftment project continues to breathe new life into the local tradition of hut painting. It culminates in a prize-giving ceremony, where participants are invited to enjoy a celebratory feast with traditional music and dance. The participants of My Beautiful Home also receive further recognition for their masterpieces as photographs from the competition are displayed at the Art Gallery in Bulawayo, where they will be sold and the proceeds will go towards continuing this culturally rich competition. Beyond this, the competition has also given women stature, by recognizing and rewarding their role in the homestead and beyond.

So why is this competition integral to preserving the rich cultural heritage of Matobo?

If the competition continues to elicit as much interest in the future as it has in the past, it is not unrealistic to imagine it having a reverse influence on other Western-style counterparts in the cities.  My Beautiful Home aims to assist the locals to prove that tradition, comfortable living without skimping on modern improvements can still be attainable. Cliford Zulu, curator at the National Gallery of Zimbabwe in Bulawayo said, “There is a danger that if this trend continues Zimbabwe will be left with little to distinguish it from any other part of the world as poorly adapted versions of bungalows replace the culturally rich, climatically sustainable and economically viable homesteads to which these decorations are applied.” And the impact of the competition can be seen in the continuous transformation of the same huts annually.

While the vision of My Beautiful Home has been to preserve the rich cultural heritage and traditions of the local people of Matobo, it can also be used to develop eco-tourism, which would contribute to improving the quality of life of the owners of the visited homes, as well as developing mutual understanding and respect between different cultures. 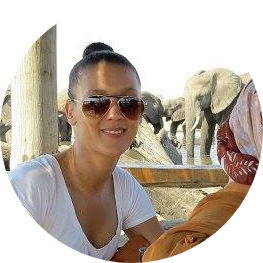 Born and bred in Cape Town, Laurin has spent the last 10 years working in the travel and safari world. She adores exploring the continent seeking out adventure, beauty and the endless hospitality of diverse cultures. “If I could put Africa into a simple tagline this would be it, -Where bush and beach meet, dancing to the African beat."