Tanzania’s second-largest national park, Ruaha extends across 7,800 square miles of semi-arid bush traversed by the near-perennial Great Ruaha River and a series of seasonal tributaries. Regarded by many connoisseurs as Tanzania’s most rewarding safari destination, Ruaha lacks the wildlife densities of the Serengeti, but seasoned safarigoers will find the remote wilderness atmosphere and low tourist volumes more than compensate. Ecologically, the park is transitional to the southern miombo and northern savannah, as reflected in an impressive variety of ungulates and birds representing both biomes. Game drives tend to focus on the waterways, which support a ribbon of evergreen riparian forest and host a subterranean water flow that is exploited by elephants even in the driest of conditions.

Cheetah, leopard and lion are all likely to be seen over the course of a normal-length safari. The park’s trademark prides of 20-plus lions are capable of reducing a freshly killed buffalo to a skeleton in a couple of hours.

The rugged landscape of semi-arid plains and rocky slopes is studded with ancient baobabs and complemented by a refreshingly untrammeled atmosphere.

Ruaha is rightly regarded to be one of the best places in East Africa for African wild dog. Be aware, however, that the wide-ranging nature of this endangered carnivore means that sightings usually depend on whether a pack is denning or roaming in the vicinity of your lodge.

Despite intensive ivory poaching in recent decades, elephants are conspicuous, with some 20,000 individuals estimated to roam the Greater Ruaha ecosystem.

In addition to impala, waterbuck, bushbuck, buffalo, zebra and giraffe, you might see northern species such as Grant’s gazelle and lesser kudu alongside the handsome sable antelope and majestic greater kudu. 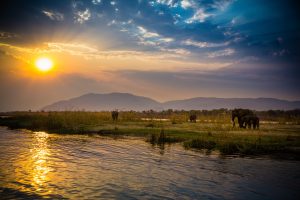 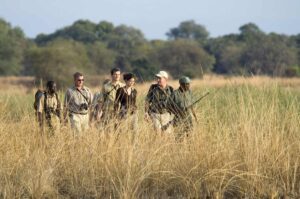 Return To The Natural Rhythm of Life On A Walking Safari