Many people think of astronomy as gazing through a telescope, or looking up and enjoying the stars, planets, meteors and satellites. However, occasionally, space does come down to Earth. Southern Africa has four sites of unique geological and astronomical interest, two in South Africa and two in Namibia, where pieces of the solar system have slammed into our planet.

There are truly unique and rare space-related geological wonders in Africa. So, while journeying in southern Africa, consider including a little piece of space in your amazing holiday!

There are two meteor impact sites of tremendous interest in South Africa. The largest meteor crater in the world and one of the oldest is found just over an hour’s drive south of Johannesburg. About 2023 million years ago, a 10-15 km diameter object smashed into the ground, making one of the few multi-ringed craters on our planet. Vredefort Crater has a diameter of 300km, (wow). The innermost ring has a diameter of 50km (still wow). Vredefort Dome is at the center of the impact crater and is a UNESCO World Heritage Site.

Parys is the town to base your Vredefort explorations. You can hire a guide for a day tour to the core area, stromatolite/basal fault plane site, chocolate tablet breccia site, and the pseudotachylite quarry site; or, you can use an area map to find the locations.

The second impact site in South Africa is Tswaing Crater, about an hour’s drive north of Johannesburg. This 1.1 km in diameter, 100m deep, hole in the ground was created by a stony asteroid, about 50 m across, crashing into the Earth approximately 220,000 years ago during the Pleistocene. Tswaing is seTswana meaning “place of salt” and Soutpan is Afrikaans for salt pan. Salt and soda had been extracted from the brine lake in the center of the crater for thousands of years until the practice was stopped in 1956.

At the entrance to the park, you can wander around a small museum. You can then choose to either walk or drive to the picnic area and carry on to the 7kms of trails surrounding the rim and down to the lake. Tswaing Crater is a proposed UNESCO World Heritage site. Let’s hope it makes it onto the World Heritage List.

The world’s largest known single meteorite was found in 1920 on the Hoba West farm, not far from Grootfontein, in Namibia. Jacobus H. Brits was plowing his field when the plow hit something hard and came to a stop. The excavated rock was a 66 ton meteorite (a very large bull elephant weighs 7 tons!) that fell to Earth some 80,000 years ago. Hoba is unique for not forming an impact crater. Scientists believe it was just too small to make much of a dent in the Earth’s surface.

The Hoba meteorite was declared a National monument in March 1955. In 1987, the meteorite, which was too heavy to move, and the adjacent land, was donated to the government, resulting in the construction of a visitor center and circular stone seating area encircling the meteorite. Thousands of tourists now visit the Hoba site annually.

In the Post Street Mall area, in the capital of Namibia, Windhoek, is a monument to a prehistoric fall of meteorites that must have been spectacular to behold as they fell through the atmosphere long ago. Twenty-nine individuals of the Gibeon meteorite, collected between 1911 and 1913 near the village of Gibeon, are placed on pillars of various heights. In antiquity, the Nama people used pieces of this iron-nickel meteorite to build tools and weapons.

The strewn field, an oval describing the area where the space rocks fell, is about 275km long by 100 km wide. One hundred to 150 individual meteorites have been collected in recent times and sent to museums, scientists and collectors worldwide. The Gibeon meteorites were declared a National Monument in February, 1950.

There are truly unique and rare space-related geological wonders in Africa. So, while journeying in southern Africa, consider including a little piece of space in your amazing holiday! 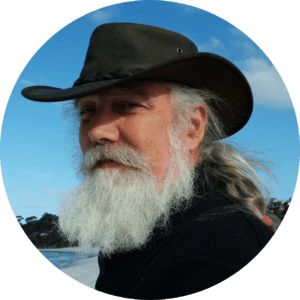 Ted is a high school science teacher interested in rocks from space, impact craters on Earth, and penguins, With a side order of astronomy, planetary science, photography, satellite watching and amateur radio. He was a Peace Corps volunteer in Nepal and enjoys traveling and living in different countries.