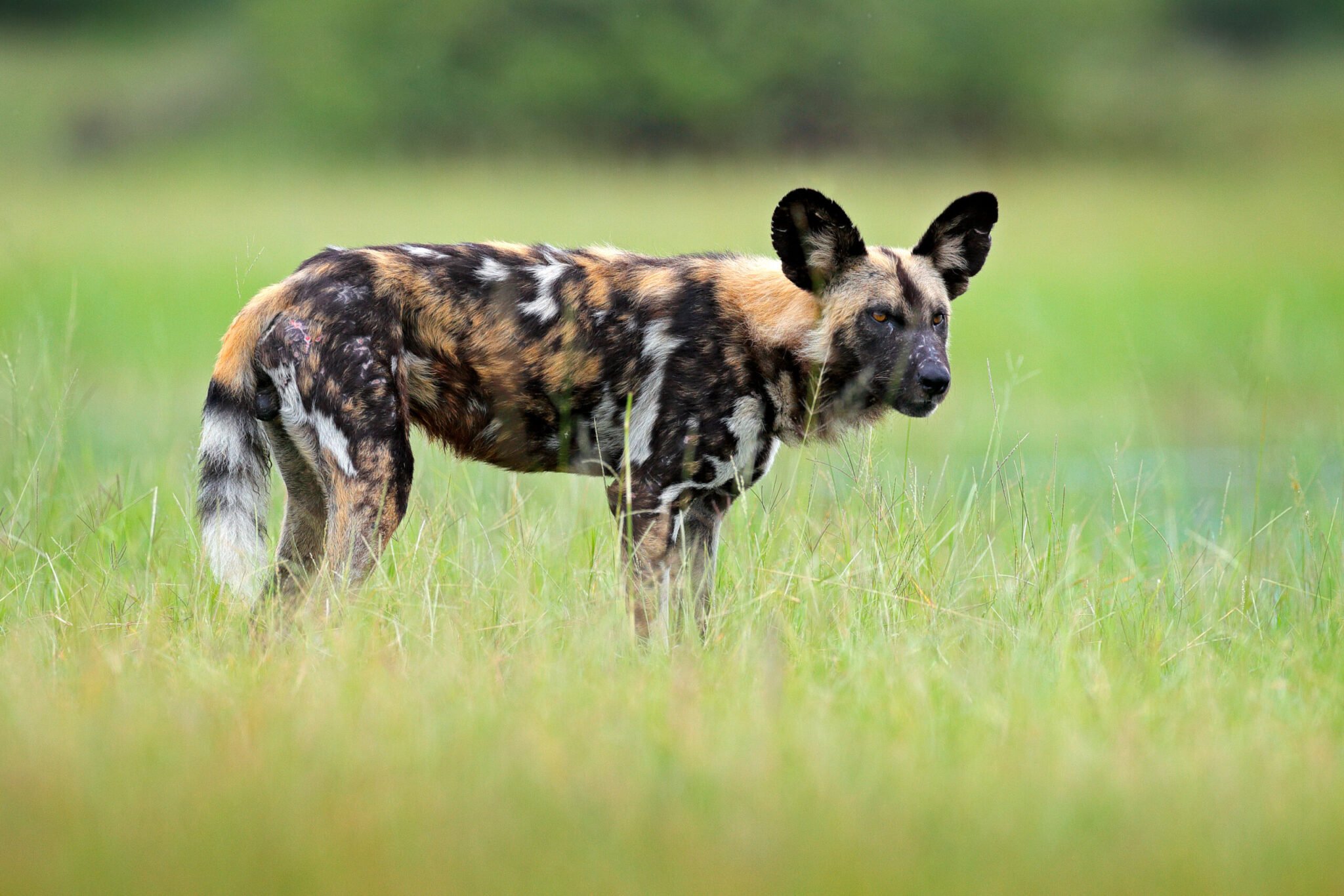 The African Wild dog is known by several names including the African Painted Dog, and the Cape Hunting Dog.

Once treated as vermin by livestock farmers, the African Painted Dog is now the second-most endangered large carnivore in Africa (after the highly localized Ethiopian wolf) and it features high on the wish list of most repeat safarigoers. Something of an outlier in terms of canid evolution, it is not particularly closely related to wolves, jackals or domestic dogs, for which reason taxonomists place it in a genus all of its own. It is also known as the painted wolf, a direct translation of its Latin name Lycaon pictus, which refers to its striking and rather cryptic blotched brown, cream and black coat.

The wild dog can be distinguished from all other African canids by its larger size, long legs, and unique blotched coat. It could conceivably be confused with a hyena but is significantly smaller and has a straighter back.

Where to see African Wild Dog or Painted Dog in Africa

Sightings of this endangered nomad cannot be guaranteed in any individual reserve, but South Africa’s Madikwe Game Reserve and the Greater Kruger are among the most reliable places. Other possibilities include Mana Pools (Zimbabwe), Moremi (Botswana), Ruaha and Selous (Tanzania) and Laikipia (Kenya).

The African wild dog is tolerant of most habitats other than rainforest and true desert, and it was once common in much of sub-Saharan Africa. Huge numerical losses in recent decades are attributable to direct human persecution, population fragmentation and a high susceptibility to diseases carried by domestic dogs. As a result, the African wild dog is now extinct in much of its former range and listed as Endangered on the IUCN Red List, with the global population unlikely to exceed 7,000. Outside of the denning season, packs are highly nomadic, and often travel long distances outside of protected areas, where they often attack livestock. The creation of wildlife corridors allowing free movement between protected areas is thus vital to the welfare of this species.

African Wild Dogs are extremely social, and packs have been known to share food and to assist weaker members of a pack. Social interactions are common, and the dogs communicate by touch, actions, vocalizations,  including sneezes to “vote”. When these dogs tire of napping and are ready to hunt, they sneeze. If enough dogs in the pack join in the sneeze vote, the whole pack sets out. Dominant individuals have influence, but the group can outvote their leader.

The African wild dog is a ferocious cooperative hunter. Packs run down their prey in a relay-like manner, tearing off chunks of flesh until the victim collapses. Medium-sized antelope such as impala and gazelle are the wild dog’s main prey, but they might take anything from a buffalo calf or an ostrich to other small carnivores. When denning, adults will regurgitate meat for the cubs to eat.

Among the most sociable of carnivores, African wild dogs live in tightly-knit packs of up to 20 adults dominated by a monogamous alpha pair. In the denning season, the alpha female will produce a litter of up to 20 pups, which spend the first few months of their life in an underground den and are raised communally by the entire pack.

Save The African Wild Dog – http://www.save-the-african-wild-dog.com