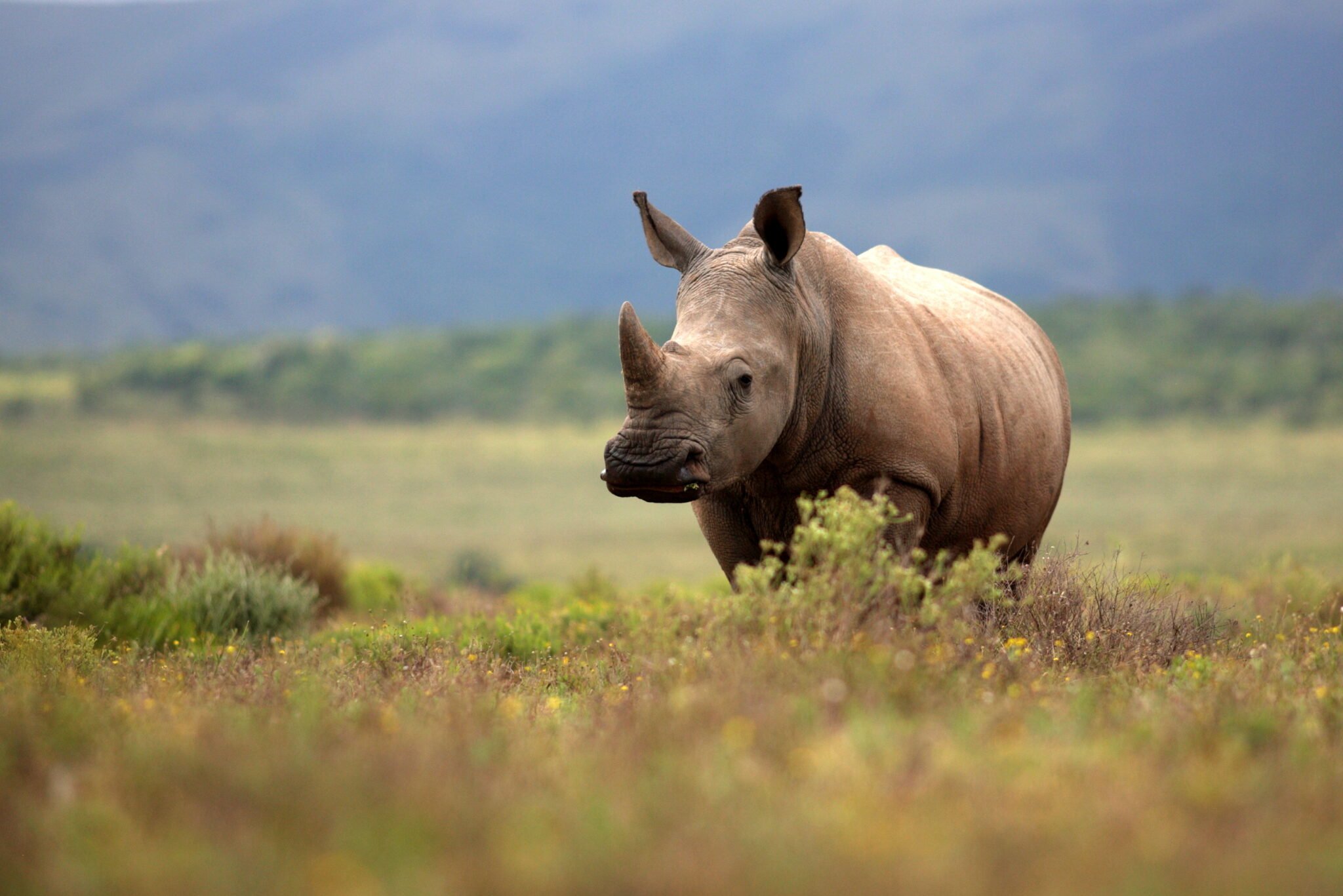 Weighing up to 7500lb, the white rhino is bulkier than any terrestrial mammal other than elephants. However, despite its imposing tank-like build, armored grey-brown hide and fearsome pair of horns, it is a relatively placid animal, given to spending its day grazing uneventfully in areas of open grassland. Despite the misleading name, it is almost identical in color to the black rhino, and it is commonly held that the term ‘white’ is a mistranslation of the Dutch ‘wijd’ (wide), a reference to the squarish shape of its mouth. For this reason, it is also sometimes known as the square-lipped rhino.

For most guides and experienced safarigoers, being able to distinguish between white and black rhino is a point of pride. The significant size difference aside, there are several subtle differences between the two species. Most striking, however, is their very different head shapes. The white rhino has a long downsloping forehead and wide grass cropping mouth that it seldom raises more than a few inches above the ground. By contrast, the black rhino is a browser with a rounded mouth and hooked prehensile lip, and it typically holds its head a few feet above the ground.

Species and sub species: Two geographically disjunct but otherwise similar subspecies are recognized: the relatively abundant southern white rhino, whose natural range barely extends north of the Zambezi River, and the northern white rhino of east-central Africa, which is extinct in the wild.

Where to see White Rhino in Africa

Almost 90% of the world’s white rhino population is concentrated in South Africa, with the main population centers being Greater Kruger and the provincial reserves of northern KwaZulu-Natal. They have been reintroduced to most private reserves in South Africa. Introduced white rhino are easily seen in Kenya’s Lake Nakuru National Park and Laikipia Plateau, and they can be tracked on foot in Uganda’s Ziwa Rhino Sanctuary.

Rhinos were extensively hunted for sport in the colonial era. Since the 1970s they have suffered even greater losses due to commercial poaching for their horns, which are prized as a medicine and aphrodisiac in parts of Asia, and as dagger handles in Yemen. Although the southern white rhino is listed as Near-threatened by the IUCN, it is by far the most common of the world’s rhinos – indeed, the global population of at least 20,000 is more than double that of all of other species and subspecies combined. Ironically, the opposite was true 100 years ago; every last southern white rhino on the planet today descends from a bottleneck population of fewer than 30 breeding individuals protected in South Africa’s Hluhluwe-iMfolozi Reserve in the 1930s. The northern white rhino is now functionally extinct, with only two semi-captive females surviving in Kenya’s Ol Pejeta Sanctuary.

White rhinos are exclusive grazers with wide square mouths ideal for cropping grass. Because of this, they are almost invariably seen in grassy habitats.

White rhinos are essentially solitary creatures, though they might sometimes be seen in pairs or small groups typically comprising a mother, one or two subadults, and/or a calf. Unlike black rhinos, the calf usually walks ahead of its mother, who will sometimes prod it along with her horn.