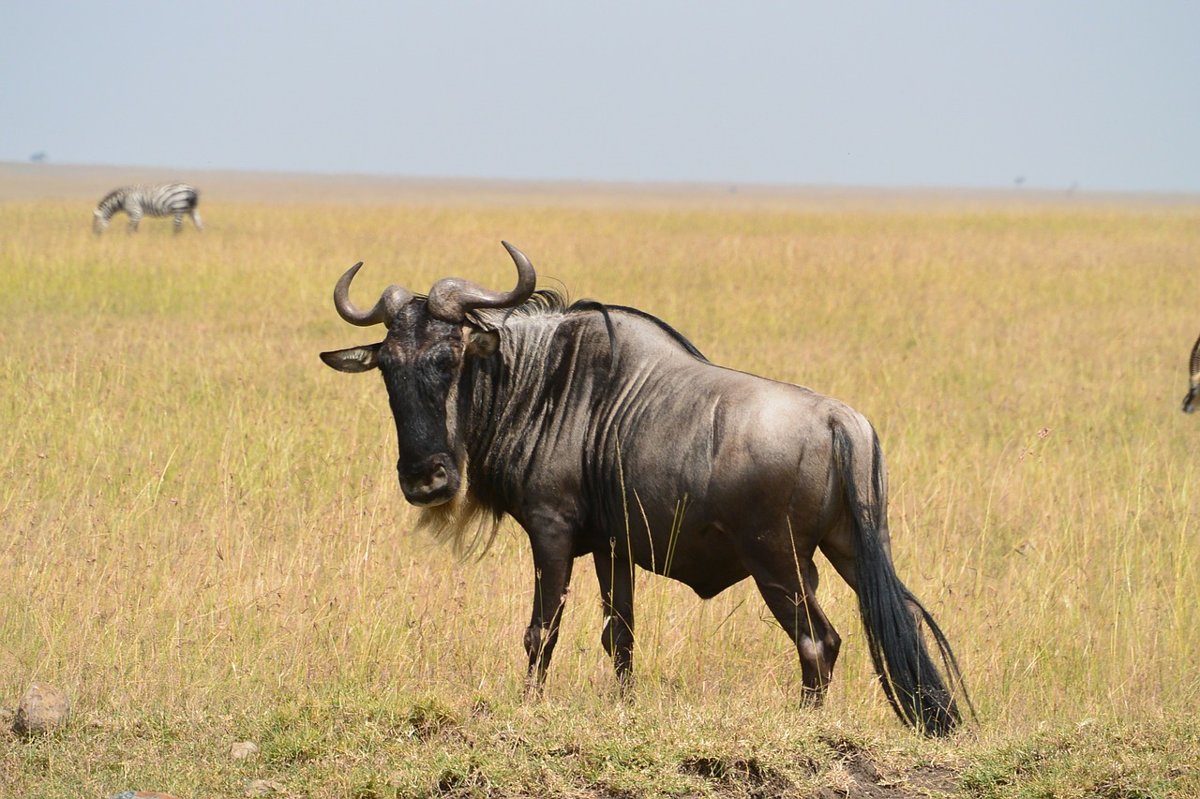 Sometimes referred to as the ‘Clown of the Savannah’, the wildebeest or gnu is a rather ungainly large antelope with a dark brown-gray coat, shaggy mane and long pensive-looking face capped by smallish curved horns. One of the most characteristic animals of the subequatorial African savanna, it is almost always seen in herds, which range in size from half-a-dozen individuals to the hundreds of thousands that migrate through East Africa’s Serengeti-Mara ecosystem in dust-kicking, bleating unison.

As suggested by its Dutch name (literally ‘wild ox’), the wildebeest has a rather bovine appearance and could be mistaken for a buffalo at a distance. At close quarters, it is far less fearsome-looking and more lightly built than a buffalo, as well as being paler in color, with a distinct shaggy beard.

Species and subspecies: Two species are recognized. The blue wildebeest is common and widely distributed in suitable savanna habitats in most parts of Africa south of the equator. Several subspecies of blue wildebeest have been described, but while these show a wide regional variation in color, they are very similar in most other respects. The black wildebeest is essentially endemic to the central highveld of South Africa, but it also occurs in Eswatini (Swaziland) and Lesotho, and has been successfully introduced to Namibia. This localized species is easily distinguished from the blue wildebeest by its darker overall coloration, shaggy white tail and heftier horns.

Where to see Wildebeest in Africa

Assuming you time a visit correctly, the wildebeest migration through the Serengeti-Mara ranks as one of the world’s greatest wildlife spectacles, particularly for those fortunate enough to witness the adrenaline-charged crossing of the Grumeti or Mara rivers. Elsewhere, the blue wildebeest is common in most savanna reserves in the southern hemisphere, but curiously absent from apparently suitable habitats north of the equator.

The blue wildebeest remains abundant in suitable habitats and the global population probably amounts to more than three million. The black wildebeest is somewhat more localized, but dedicated conservation efforts in South Africa mean that numbers have grown from a precarious low of around 500 individuals in the early 19th century to almost 20,000 today. Both species are assessed as being of Least Concern in the IUCN Red List.

Wildebeests are dedicated grazers, feeding mainly on short grass, or on taller grass whose upper canopy has been cropped by the zebras with which they frequently cohabit.

Arguably the most gregarious of antelope, the blue wildebeest typically lives in herds of a few dozen head. Different herds often join together at night for safety, or to move together through migratory ecosystems such as the Serengeti-Mara, whose plains are routinely trampled by seasonal aggregations of more than a million individuals. Males tend to be quite tolerant of each other except during the short breeding season, when they become highly territorial and aggressive. Dominant males usually first try to scare a competitor into submission – pawing the ground with their hooves, thrusting out their horns, and emitting a series of loud nasal bellows (from which derives the name gnu) – before entering into actual combat.